Three generations serving Whatcom County with all your rental needs

“Your local family choice since 1947”

“Your local family choice since 1947” 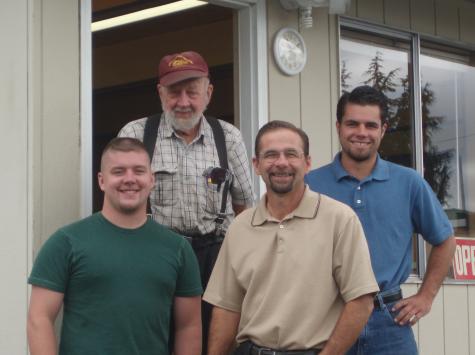 Fountain Rental started out as Fountain Motor Company, when orginally founded in 1947 by Ray Breakey, was a dealership for Jeep, Rambler, and later Toyota. In the early 1960’s, Ray started integrating renting cars in addition to sales. In 1990, Ray passed the reigns on to his son Buck. Buck took on the responsibilities of the company and did a great job of seeing the company through some changes after September 11th, 2001. Ray came in every day until he passed away on September 11th 2010 after a long fight with cancer. Buck has worked at Fountain Motor Company for over 50 years. Andy, Buck’s oldest son, has worked for the company for over 24 years. Buddy, Buck’s second oldest son, has also worked for the family’s business for over 20 years. Both are helping their dad ease into semi-retirement by taking over some of his duties. Andy enjoys working at the business his grandfather created and he loves to help people find the car they want for a great price. Buddy takes after his dad in enjoying detailing vehicles, and does a great job keeping the rental fleet looking good. So there you have it, three generations working hard to provide a great service to you and the community. We are proud to be a part of Bellingham and Whatcom County.

Thank you for supporting our local, family-owned business.
-Ray, Buck, Andy, and Buddy